The first Science Hack Day Vilnius was a huge success! We had over 70 participants + 20 or so mentors, jury members and even more spectators. Everyone was excited to *finally* get some hacking action just for science and fun. The hackathon was held at Technarium hackerspace – a very creatively messy space that has a hacker vibe as no other 😉 See all the photo moments of the hackathon on our Facebook page & Raitis’ SHDV17 photo album — we’ve used his pictures throughout this post. SHDV17 is soon to be featured on Mokslo Sriuba TV too!

And here’s all hacks of the weekend! 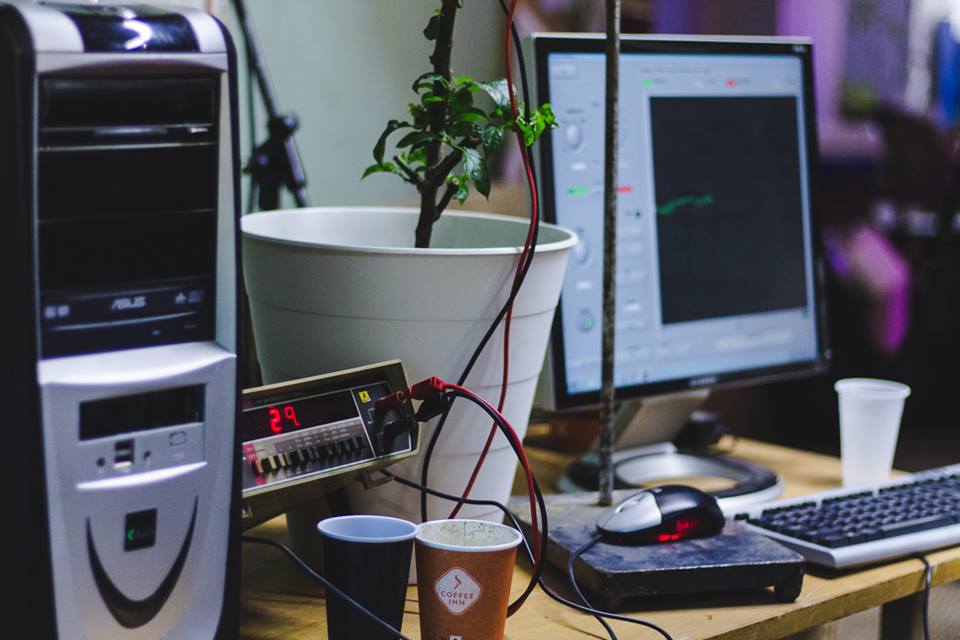 Mentored by Vida Mildažienė – a cell biologist from Vytautas Magnus University, the team of 8 students measured plant electrophysical changes under varying conditions, using a pair of electrodes – needles stuck in a stem of a perennial pepper plant (ouch!). The pepper came from the Technarium greenhouse (thanks to opit for donating one of her peppers for science!), and the plant electrophysical system was hacked with help of Dalius, one of the mentors from Technarium. He used a couple of needles from Technarium sewing area as electrodes 😉 (since Pjezofilai team was 7/8 girls, we sneakily had some International Women & Girls in Science Day celebrations too! — see left)

The team measured how the pepper reacts to various types of stress, including when a leaf or the stem gets cut (ouch again!), is touched, hears loud noise. They even experimented with acid and sodium hydroxide poured right into a wound! Conclusion #1: plant electrochemical signals can be effectively measured even under DIY-garage conditions. Conclusion #2: plants feel pain (and many other things)! Be kind to them. #2 Open Lab team from Makeblock.lt was hacking an open source laser cutter, which would be cheap & composed of easily accessible parts. At the end of the weekend the laser still didn’t cut, but the team walked away pleased with good progress! While the virtual reality hack did not come to completion, the team did end up with a pretty cool (and hefty!) game with shooting tanks & cannons and blinking LEDs (of course), which had to be transported ceremoniously into the demo area! #4 Troliai (“Trolls”) created a “prisoner’s dilemma” Android app – a psychological game for two, which could be used both as a fun game, a trust exercise between friends, and a method in therapy. For example, a therapist could adapt a version of Troll’s game to create own situations and use it on their patients, e.g. for a couple that has relationship troubles. #5 Scale Hack team took it upon themselves to solve a hardware problem: electronic scales could be bought online for several bucks, but any scales that could be connected to a computer are a lot more expensive. The idea of their project was to create a compact and cheap solution that could be used to hack any conventional consumer-grade or more precise scales to make them connected — and therefore suitable for DIY science! Throughout the weekend Scale Hack worked on this hack, including a module to convert analog signals to digital, an Arduino board, Bluetooth & other bits and bobs. Result: smarter scales that connect to a PC via USB serial and/or Bluetooth – not without issues, but a good start! The project originally started off as Genome Music, but the group soon switched to proteins since there are more amino acids than nucleotides (more keys!). The idea was to play proteins of different species, e.g. humans and mice, and see how they compare by sound, not just a dull sequence of letters. That gives scientists a chance to look at their data from a different angle, and artists to incarnate it in a totally unexpected but beautiful form! #7 H-CELL aimed to create an advanced hydrogen cell to make electricity from H & O. The idea was to replace complicated semi-permeable membranes that are usually used in hydrogen cells by a vacuum. The hack did not work in practice (as it is not so well defined in theory either!), but the team sure had some fun in the metal worksop making the vacuum chamber from reused plastic wheels and Coke tins, as well as producing hydrogen gas, first by electrolysis and then chemically from sulphuric acid. 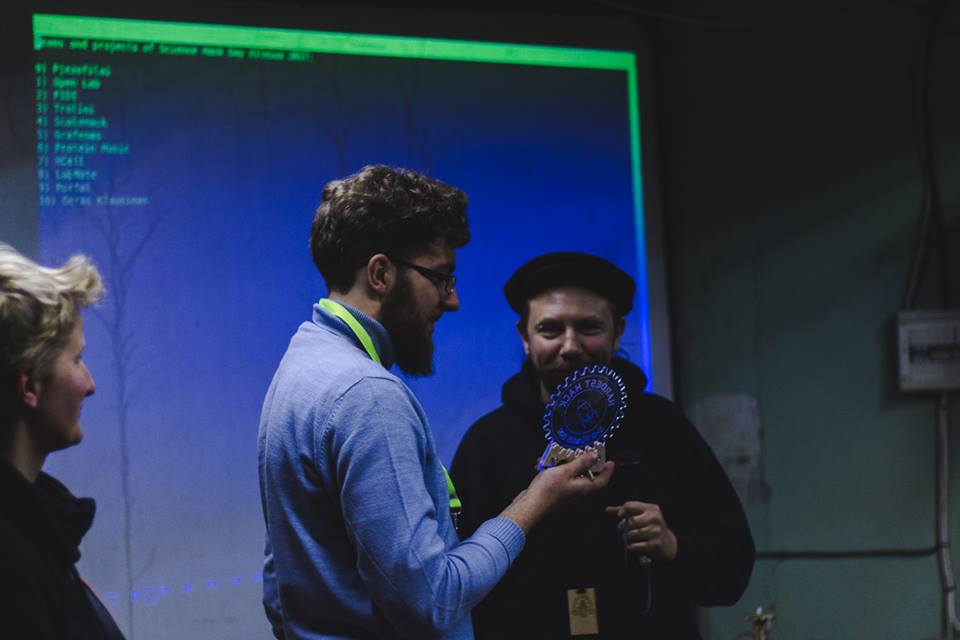 #8 Lab Mate team chose to spare the lives of those poor graduate students (or give more coffee time to researchers of all ranks – whatever) by creating a prototype “lab mate” that would dispense fluids to test tubes, mix them, heat them and dispose of them by vacuuming. The “lab mate” could in principle be supplemented with various other modules too, depending on the needs of the lab worker!

The prototype was made using Lego Mindstorms principle, by constructing easily programmable modules from transformable parts on a magnetic table (for an optical table): Lab Mate claimed the MOST SUSTAINABLE HACK – for sparing the lives of those poor graduate students with their hack, get it? 😉

#9 Portalas team aimed to make a real life replica of Sentry Turret from the game Portal. The little robot was supposed to turn on 3 axes, speak and shoot at it’s enemies! 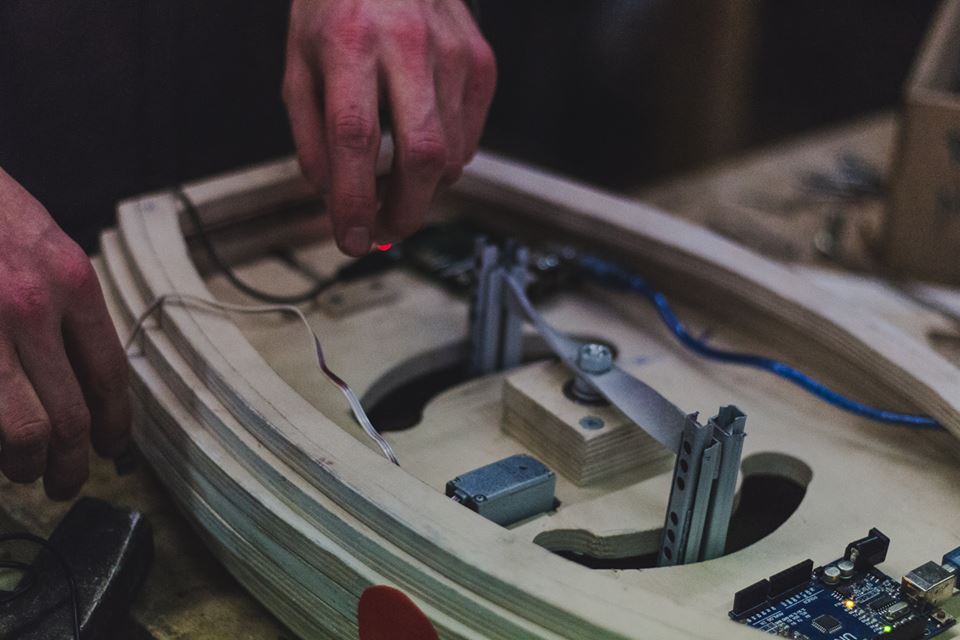 Sentry came to the demo session still covered in wet paint, but turning on one axis, and speaking!! Good start for the Portalas team. #10 Graphene team formed at the beginning of the hackathon with an ambitious aim to make graphene! Unfortunately, after doing some research the team ran into a bit of a dead end – while they realized they could make graphene even in hackerspace settings, the problem would be … to check what they’ve made! Due to the subtle features of graphene, they would need an atomic force microscope to see the atomic structure of the made material.

An idea popped up to make a DIY AFM & solve that problem!  But due to the complicated nature of the project and expensive parts that was also not feasible in the span of one weekend. Idea for next year’s hackathon then !!

#11 Geras klausimas (“Good question”) team – Grėtė, with help of mentors Martynas and Kristina, had made a laser-based system to project a drop of liquid onto a surface, to visualize microorganisms living in that tiny drop! The projection was supplemented with “stars” light effect symbolizing how life evolved from stars, in a way. 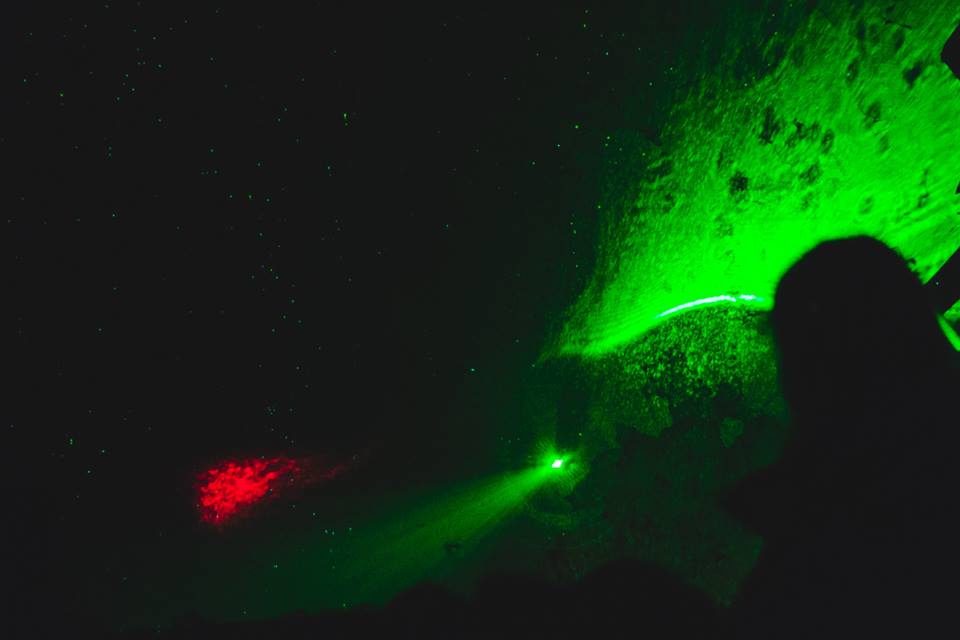 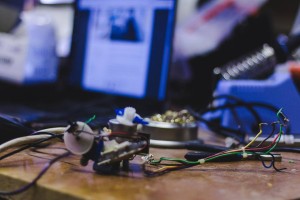 There were so many more things going on, for instance, a spontaneous vibrobot workshop for kids held by M-Lab, or weird projects popping out of nowhere, a cinema night and even some explosions. 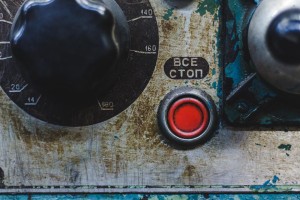 That’s that! Thank you everyone who helped to make the hackathon happen, the global Science Hack Day community for the inspiration, and SPECIAL THANKS to all the PARTICIPANTS for making the first Science Hack Day Vilnius such a cool weekend to remember!

Our gratitude to all the sponsors & friends of SHDV17: Already looking forward to the next Science Hack Day!!! 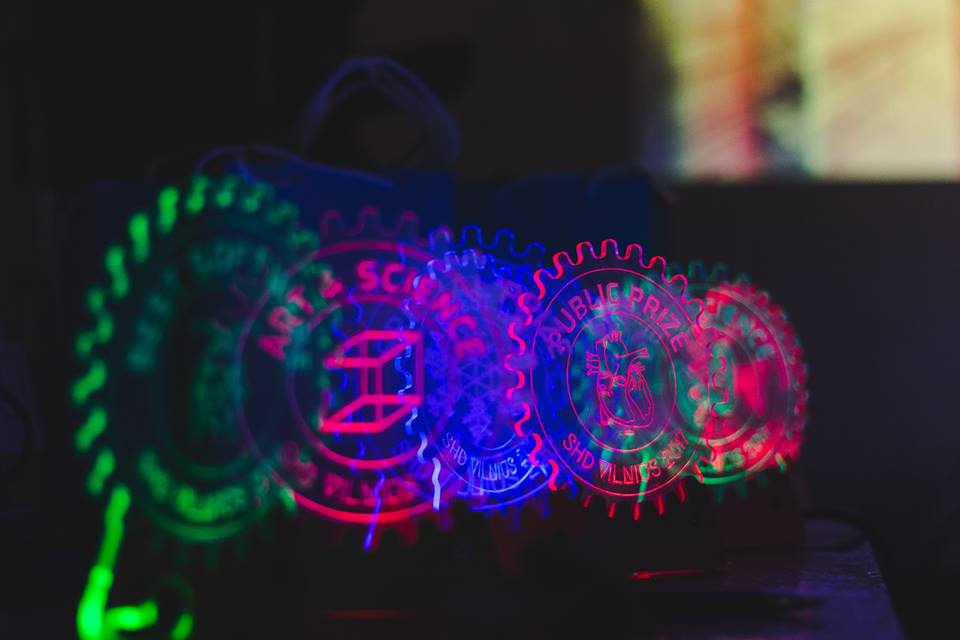